Would you like to switch to the accessible version of this site?

Don't need the accessible version of this site?

How does this accelerated rehab with the ARP Wave work?

Prior to Super Bowl XLIV in 2010, the major story two weeks leading up to the big game was whether or not Dwight Freeney would play. Dwight had suffered a Grade 3 Sprain in his right ankle during the AFC Championship Game against the Pittsburgh Steelers and an MRI showed torn ligaments in the ankle. Typical recovery time was estimated at 10-15 weeks minimum and most doubted he had even the slimmest of chances in making the game. Dwight immediately contacted Denis Thompson (ARP Wave Founder) and 12 days from the Super Bowl 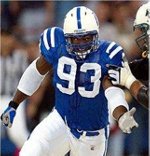 went into treatment. Denis flew to Miami to be with Dwight around the clock so he could apply the treatment and rehab the ankle ligaments utilizing the ARP Wave System and protocols. One day before Super XLIV another MRI was conducted on the ankle and the MRI showed complete healing of the ligament tear and Freeney was subsequently cleared to play. Complete healing on an injury that typically takes 10 weeks MINIMUM to even begin to repair itself. That is the power of the ARP Wave System.

Elite athletes have to recover quickly to optimize performance, avoid loss of playing time and delay the end of their athletic careers. So many of these athletes around the US (and the world) have discovered the benefits of rehabbing with the ARP Wave system. Recent statistics indicate the ARP Wave System is used in these sports:

Edgerrin James sustained a Grade II hamstring tear and was not expected to practice or play for weeks.

In 4 days after 10 treatments with The ARP Wave System, an MRI confirmed no more tear. Thanks to the same system that we use at “Peak Performance and Rehab Clinics”, he did not miss a practice or a game…

Tim Thomas, Boston Bruins, received the Vezina Trophy for “Best Goalie in Hockey” a year after hip surgery. In his acceptance speech, he thanked The ARP Wave System for allowing him to fully recover from his hip surgery, and for increasing his athletic performance immensely

“The ARP Wave System has been GREAT for me, anytime I had something minor or serious, they always came through and helped the healing process…”

Find us on the map

Review By Our Satisfied Patient